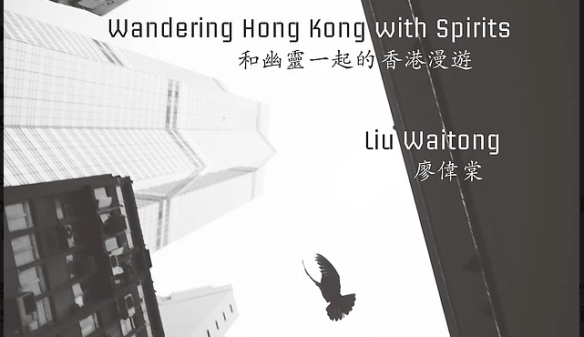 While reading Wandering Hong Kong, I was constantly reminded of the idea of “disappearance” in Ackbar Abbas’ book Hong Kong: Culture and the Politics of Disappearance—disappearance not in the sense of vanishing and irreparable loss, but of displaced appearances. Photography is very potent in demonstrating this kind of “disappearance,” as it simultaneously captures and freezes time in a frame, while also creating the realm of the image in the form of the artist’s own unique representation. One is also always aware of selectivity and perspectives when doing photography.

Liu Waitong’s poetry is very much in tune with his observations of the world as a photographer.

Nogues asks, “What is it to be a Hong Kong poet writing now?” She answers:

For Liu Waitong, it means to be accompanied always by ghosts. But it means also to seek them out and keep them company in turn — to haunt with them. Working through questions of displacement, citizenship, and competing visions of Hong Kong’s and China’s future, Liu’s poems insist that a careful attention and receptivity can be revolutionary. For Liu, that attention is what we owe our pasts and each other.

Christopher Mattison, the director of the Atlas series of translations of Hong Kong Chinese literature into English, points out in his introduction that it would be a mistake to brand Liu primarily as a political poet. Rather, Mattison says, Liu is a careful observer of Hong Kong, and many things in Hong Kong are inherently political. Perhaps it’s just a matter of emphasis, but I’m not certain that I agree with Mattison here; while it’s true that Liu is indeed a “poet of longing,” as Mattison suggests, “of past eras, former loves, lost neighborhoods, and poetic mentors” (xvi), nothing on that list is separable from politics in the poems or in Hong Kong more generally. When Liu elegizes the demolished Central Star Ferry Pier, for example, he is not only lamenting the loss of a familiar landmark, but also pointedly indicting Hong Kong’s real estate market, which incentivizes the replacement of historic sites with new, more profitable development. In Liu’s poem, the pier shakes its head and sings into the cold rain: “It all will finally disappear to become a postcard sold / for ten dollars. This Hong Kong will disappear and become real property / with an unspecified mortgage” (93).

Click on the image above for the full review.

A Few of my Xi Chuan translations in print

Some of My Writing on Literature & Translation